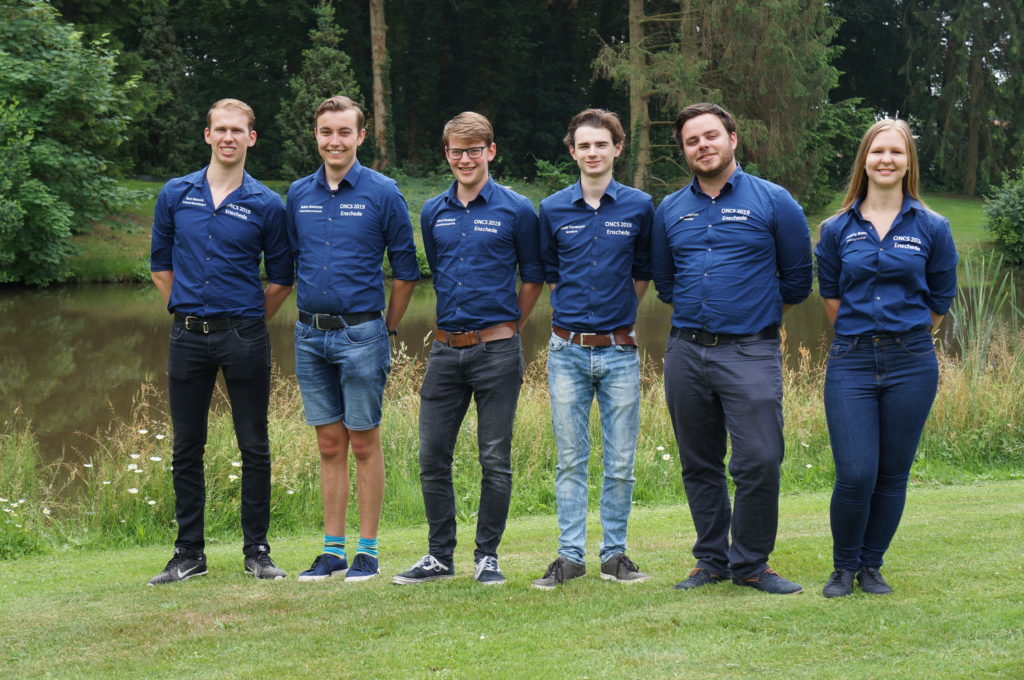 Let introduce myself! My name is Thijs Engelen and I am 22 years old.

Last year I completed my bachelor in Chemical Engineering at the University of Twente, and now I’ve started my master in Chemical & Process Engineering. Besides my studies, I like to organise all kinds of events, hang out with friends and drink a beer.

This year I will be the chairman of the ONCS committee, and, together with the rest, we will make sure you can have a good time at the ONCS!

Next to the ONCS committee I’ve been active in the 53th board of C.T.S.G. Alembic as commissioner external affairs and did a number of committees. I joined the ONCS committee because of the amazing opportunity to organize an amazing event for 700 chemistry students and the challenges it set.

So be prepared: The ONCS is coming.

Hey, my name is Daniël! Mr. Chairman asked me to write something about my tasks and myself and as the loyal secretary that I am, that’s what I will do.

My main responsibilities within the organisation committee include the enrollment process, contact with the associations and providing information through e-mail and this website. Additionally, together with Thijs, I oversee the safety and security during the tournament.

Besides my study efforts as a first year’s Chemical & Process Engineering Master student, I play badminton at the UT. After serving in Alembic’s sports committee for two years, together with several emergency response qualifications, I hope to contribute to an amazing edition of the ONCS.

Stay safe, see you in May!

Hi! My name is Kimberly, I finished my bachelor in Chemical Engineering in the past three years but postponed to start my master to next year, as I am doing a board year for the cultural umbrella of the University.

My function is the ONCS committee is to divide and spend all the money, alias ‘the treasurer’. Furthermore, I also took up some fun stuff, for example I am responsible to write entertaining social media posts and, together with Thijs, for the party on Thursday including the beer relay. I even could be a little bit creative by designing the logo of this year!

As the only woman in the committee I have to keep up with all the boys, which succeeded well so far I think. You could say I am the queen of the ONCS as I am also the vice-chair!  My favourite sport, or performing arts, is dancing. As this is naturally not a competitive sport, I played rummikub during the ONCS. I am working on my sportivity by going to the fitness once in a while.

I am looking forward to receiving your participants fee and see you at the ONCS!

Hi, my name is Ruben! On the picture I’m the one who didn’t get the memo about the long pants.

About myself, I am now a fourth year Chemical Science & Engineering student at the UT. Last year I did a board year at our study association, Alembic, as the secretary. I am a baseball player myself, however, despite the nice baseball field on the UT campus, we decided not to include baseball at the ONCS. I’ve been an active student all the four years I have been here and, also because I live on the campus, organizing the ONCS is right up my alley.

I hope you have fun at the ONCS, see you there!

Dear lords and ladies, I am Wisse Hersbach, first of my name.

As a tournament commissioner, I am the one who makes sure you can all sport and sleep at the sports centre. This is my primary responsibility together with my good bud, Ruben Streekstra (RubenCommissioner). However, the ONCS is never only about the sports. For me, the ONCS is still about coming together with all chemists and party and laugh till we fall over. This is the task I set for myself with this committee: that everybody has the most amazing and perfect ONCS experience. This means I take care of the Wednesday drink, the special activity on Thursday and last but not least the wake-up call next to the sports. Being connected to almost every part of the ONCS I think I can have a big influence on how everybody will experience the ONCS.

In my daily life now, I am a member of Green Team Twente, which means next to organising the ONCS, I am building a hydrogen car too. After the long work days, I play football at the local student club (v.v. Drienerlo) in the second team. I am, also, the captain of a student team, which plays 7 vs 7 against other students through the week. The ability to do and organise stuff together with the enthusiasm to do as much on sports as I can, seems to me like an excellent tournament commissioner. I hope you all will enjoy the ONCS as much as I will do and never forget the ONCS 2019 in Enschede.

Hi there. My name is Bart Morsink and I am currently in the first year of the master Chemical & Process Engineering. I am the oldest and therefore also the wisest person in this committee.

I really like this year’s theme of this ONCS since I am a big fan of Game of Thrones. My favorite character in Game of Thrones is Jaime Lannister, except for the parts where he is having kinky times with this sister. I think that is not okay.

As my function probably suggests, my main responsibility within the ONCS is recruiting sponsors to fund the event. Next to that I like to involve myself with theme related stuff. I joined this committee since I really enjoyed the last three editions of the ONCS and wanted to find out what it’s like to organize such an event.

Next to being in this committee and studying I keep myself busy with going to the gym and hanging out with friends.